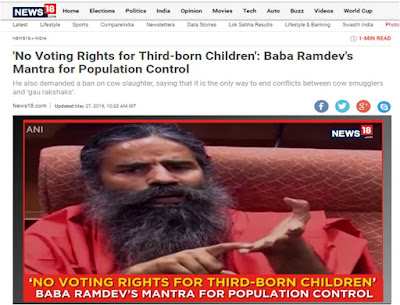 Sanctions Are Not the Solution

At a press conference held on 25th May 2019, Yoga guru Baba Ramdev called upon the Government to implement punitive measures to contain population growth. He advocated for the denial of voting rights, contesting elections and benefits of Government schemes to the third child. He also added that if such a law is enacted people will not give birth to more children irrespective of the religion they belong to.

Punitive and coercive measures like restricting the rights of the third born are regressive, discriminatory and violate the principles of informed choice and human rights.

India has been a signatory to various International conventions and treaties like the Tehran UN Conference of Human rights in 1968, the Cairo International Conference on Population and Development in 1994, the London summit on Family Planning 2012, etc.  and in doing so, has committed to ensure that human rights are respected and protected in family planning programs. The 1994 International Conference on Population and Development which called upon States “to ensure that Family Planning programs abide by human rights norms and professional standards….. and that the provision of contraceptive services are free from coercion and discrimination, ensure informed decision making, respect privacy and confidentially and respect the dignity of all persons”, marked a paradigm shift in India’s family planning program from a target and technology driven program, to a program which focused on empowering women and emphasizing on a human rights and social development centered approach. A coercive approach like the one suggested, would contradict India’s commitment to rights based Family planning and prevent individuals from deciding freely and responsibly the number and spacing of children they choose to have.

India has made substantial progress in the last few decades in terms of expanding access to contraceptive methods. Contraceptive usage has tripled from 13% of married women in 1970 to around 54% in 2015-16. Similarly the Total Fertility Rate has more than halved from 5.7 in 1996 to 2.3 in 2016 with 24 States and Union territories achieving replacement level fertility. While family size is decreasing and people are opting for smaller families, they want to have a particular sex composition of their families with one or two boys because of the deeply entrenched preference for sons. This has resulted in gender biased sex selection. The Sex Ratio at birth is abysmally low at 898 girls per 1000 boys (SRS 2014-16). Imposing the two child norm and exercising coercive measures would further advance son preference and daughter aversion, thereby increasing sex selection and elimination.

A look at decline in fertility shows that there has been a consistent decline in fertility across the Country and across all religions. The Total Fertility Rate declined from 2.7 to 2.2 between NFHS III in 2005-06 to NFHS IV in 2015-16. During the same period, TFR among Hindus declined from 2.59 to 2.13; for Christians from 2.34 to 1.99; for Muslims from 3.4 to 2.61 and for Sikhs from 1.95 to 1.58. Thus there is a consistent fall in fertility across the Country and across religious groups and communities. The pace of decline can be enhanced by improving access to quality contraceptive services and offering full, free and informed choices.

A study on understanding the implications of the two child norm on Panchayats, undertaken in 2003 in five States of Andhra Pradesh, Haryana, Madhya Pradesh, Odisha and Rajasthan, (Panchayti Raj and the two child norm: Implications and Consequences, Mahila Chetna Manch, January 2003) brought out that coercive policies are exclusionary and largely impact the vulnerable. Of the disqualifications due to the two child norm, Schedule caste, schedule tribe and other backward class representatives formed a very large percentage. The study also revealed that women bore a large brunt of the policy, with many women deserted or divorced after giving birth to the third child or forced into having an abortion, which in most cases was conducted in unregistered and unsafe conditions to hide the fact that she was pregnant a third time.

India with 356 million young people in the 10-24 years age group has the world’s largest youth population, comprising 28% of the total population of the Country. It is likely that this population will add to the population momentum.  Hence, India’s Family planning program should be planned in a manner to address the contraceptive needs of young people. This can be done by empowering them with information and services. Although India’s family planning program provides a cafeteria approach with a basket of choices, the reality is that female sterilization continues to be the most commonly promoted contraceptive constituting 75.3% of modern family planning methods used (NFHS IV).  The use of spacing or reversible contraceptives methods has increased but the increase has been minimal from 5.6% in 1991-92 (NFHS I) to 11.2% in 2015-16 (NFHS IV). With a fairly large proportion of girls (26.8%, NFHS IV) being married off below the legal age at marriage in India, and the unmet need among young people in the 15-24 years age group being 22% as against 12.9% of the overall unmet need, the family planning program should be positioned on addressing the needs of younger couples This could be done by: