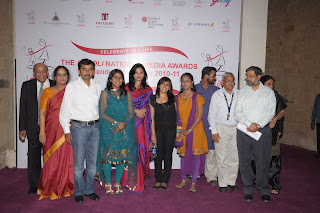 Q: ) What do you get when you have the country’s most gender-sensitive and conscious media, along with three incredible women achievers, an 8 yr old acting prodigy and a singing sensation like Usha Uthup?


The National Laadli Media Awards for Gender Sensitivity 2010-11 not only saw its thousand-seater venue completely house-full with an enthusiastic audience, but the event was also graced by the presence of Honorable Chief Minister of Maharashtra, Shri Prithviraj Chavan and popular Bollywood Actress Rani Mukerji. UNFPA Representative a.i. India, Mark Derveeuw, was also present as a Special Guest at the award function. The audience applauded the media professionals and agencies who were being awarded for their gender-sensitivity in the news and advertisements they released in the year that went by. 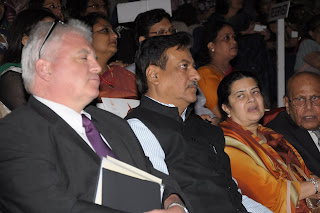 The National and final leg of the Laadli Media Awards took place at Tata Theatre, NCPA on Friday, 8th April 2011 at 6:30 pm. The vivacious Pooja Bedi who was the MC for the evening, had the crowd in splits with the little anecdotes she sprinkled in between the compering throughout the function.


A group of girls from the D.M. Jariwala orphanage performed a mesmerizing inaugural dance for the function choreographed by the Terence Lewis Dance Academy. Thereafter, Afsana Sagiir Ahmed, an 8yr old girl performed a play titled Ek Laadli ki Kahani Uski Zubani and won the hearts of everyone present with her beautiful performance. 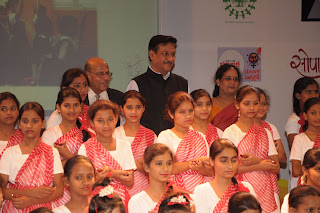 Pooja Bedi then called on Chief Guest Rani Mukerji to award veteran photographer Homai Vyarawalla, with The Laadli of the Century Award. Kathak Queen Sitatra Devi was awarded The Laadli Lifetime Achievment Award for the Performing Arts - Kathak by the Chief Minister. Mother of Orphans, Sindhutai Sapkal was awarded The Laadli Lifetime Achievement Award for Social Service and in her speech thereafter she gave beautiful renditions of a few Urdu, Hindi and Marathi couplets. The audience gave a standing ovation to these strong independent women who broke the glass ceilings to pursue their dreams at a time when women did not have a voice of their own. 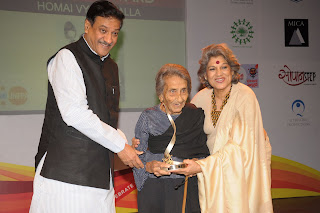 Singer Usha Uthup gave a power-packed performance. She sang popular songs such as ‘I will Survive’ and ‘Words’ for the Girl Child and the audience cheered and sang along with her.

The entire event was absolutely spectacular and Population First received a phenomenal response from the audience toward the cause of the girl child and the Laadli Campaign. The audience pledged their support to the girl child by signing for the Million Signatures Campaign at the registration desk. We thank everyone who attended the event making it such a grand success. Little drops make an ocean, our little effort in the form of the Laadli Media Awards along with such tremendous support will ensure that one day our media is completely gender-just and responsible. 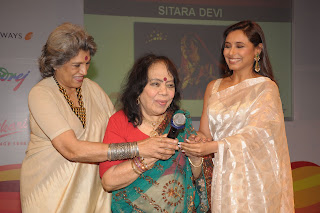 Mr. Pranesh Mishra- “I greatly enjoyed the Award ceremony. It was really a touching event - extremely inspiring. I would be happy to help your organization in any way I can.”

Mr. Astad Parakh- “ The programme was really touching and I am sure it carried a strong message to all present, as is also witnessed by the news item on the very positive comments by the CM.”

Mr. Kishore Jagtiani- “What we are today is because of our Laadli, otherwise we would not exist. I would like to help the LAADLI program and be a small part of it. 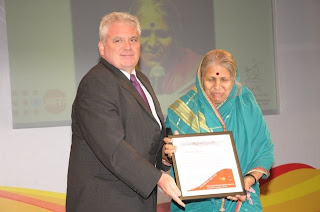 If you would like contribute or help the cause in some way, you could support the Laadli campaign by writing a generous cheque, Volunteering your precious time, sponsoring our events and activities during Ganeshotsav and in colleges in the next academic session and finally organizing meetings, sensitization programmes in your neighbourhoods, communities, and offices.
Posted by A.L.Sharada at 7:03 AM No comments:

Thank God She Is Not Alive!

Sex ratio – a term which most people would have now become familiar with considering that the newspapers have been full of the sex ratio figures as revealed by the census. The child sex ratio is falling – that is the number of girls per 1000 boys in the 0-6 age group is decreasing. Now what, may I ask, is surprising about that? We as a society do not value our women so they are always the last to get medical help. And women themselves have been told for centuries that they must put everyone else before themselves so they do not even demand services. They have no economic value assigned to their work so one less or thousands less makes no difference to the GDP. Education too – they are lucky if they get it – even if they do, many end up sacrificing their potential for family or at the feet of the husband’s ego….. the usual refrain!

And there begins the cycle where the woman who has not felt valued by society and learnt not to value herself becomes society’s accomplice in eliminating the girl child. And so begins the downward spiral of the child sex ratio. Technology has made it easy and guilt-free. All you need to do is to find an unscrupulous doctor, get an ultrasound done, understand the unsaid message and decide. You could go a step further – chose the male embryo from the petri-dish. No bloodshed, no guilt, no evidence.

So far so good – but what defies logic is why prosperity and education is not making an impact. My grandmother believed that education would empower her daughters and she braved all opposition to send her daughters to school and university in the 1940s. She was sure that by the time her granddaughter grew up there would be no difference between a son and a daughter. Thank God she is not alive to see this day – how would I have explained this trend to her.

By
Nivedita Sinha
Posted by A.L.Sharada at 11:56 PM No comments: