Laadli Celebrates the Power of Theatre

“I regard the theatre as the greatest of all art forms, the most immediate way in which a human being can share with another the sense of what it is to be a human being.” ― Oscar Wilde

This could not be further from the truth for us at Population First, for arts and theatre are some of the core tools of our outreach. Be it street plays in collaboration with Theatre of Relevance or college productions across the city of Mumbai on gender-based issues, school plays on sanitation in Shahapur Zilla Parishads or theatre workshops for our village level committees and health service providers in the past, have deeply affected the audience and the participants alike. For some, the plays left an indelible mark on the current state of affairs in the society while for some the art of acting and theatre as a tool helped understand their own role in the society and its development.

So, it was only logical progression for us to honour the art form itself in our Laadli Media and Advertising Awards for Gender Sensitivity (LMAAGS).

And as the world celebrates this art form today, we thought of taking a trip down the memory lane, when Theatre became one of our major categories at the National LMAAGS. 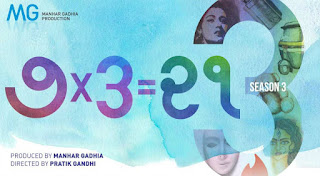 In its 3rd season, Saat Teri Ekvees, a Manhar Gadhia Productions, has a new set of monlogues by women and has an underlying theme of “desire”. It explores narratives on Survival, Intimacy, Being Oneself, Motherhood, Love, To Be Born and Appreciation. Some stories evoke heart-warming smiles, others evoke a soul-searching silence but all makes one sit-up and notice a woman’s soul and situations. The play deals with women characters that have shown strength and courage to establish their individuality in an unsupportive social structure. 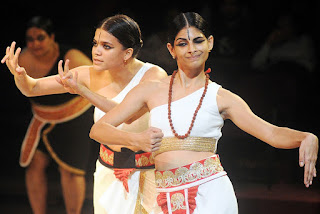 A comic, tongue-in-cheek, re-telling of the story of Shinkhandi; mixing the traditional with the contemporary, the grandeur of physical Indian storytelling and contemporary English verse – questioning gender, sexuality, masculinity, femininity, and everything in between. This unique perspective and the conversational style of the play motivates the audience to examine their own biases and realise the futility of the labels that society enforces. 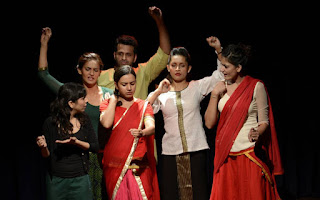 Directed by Puja Sarup and Sheena Khalid, ‘Ila’, looks at gender, its related myths as well as the dilemmas and the importance they play in our lives today. The story is about a king who ventures into an enchanted forest and is transformed by a spell. As the moon waxes and wanes so does Ila, turning from man to woman and back to man. With ever-changing landscapes sometimes in ancient land and sometimes in the local trains of Mumbai- and leaps in time, his chorus takes the audience through a provocative, playful and exciting journey that questions what it means to “be a women/man and everything in between.” 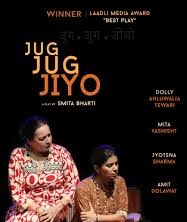 2013-2014
Jug Jug Jiyo
An innovative play in Hinglish, Jug Jug Jiyo, directed by Smita Bharti, unravels the lives of two women across three decades, who are sharing a house in a small town. The play begins with the visit of their children who are in a live-in-relationship in Mumbai to their home town to meet their parents. The new dynamic in the family leads to a small confrontation and lays bare the hidden past of the two women until there is nothing left to lay bare. The story intimately journeys through hard hitting topics of social stigma of unmarried and pregnant women, marital rape, female foeticide, infanticide, trafficking and illegal surrogacy. Jug Jug Jiyo is an entertaining yet socially relevant play that compels one to think of the many messages it wants to deliver. It ends with love and hope that change is possible. 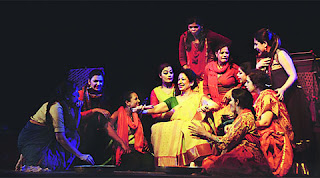 An all women production, ‘Baaware Maan Ke Sapne’ enacted by homemakers who have gone through vigorous training of discipline of time, space and body, besides sessions on acting, communication etc. The protagonist Amma, an elderly woman decides to visit her daughter in London, and in her preparation for the voyage gets together with all the women in her family who share their stories – each being ruthless commentary on social evils that plague us to this day. The play intelligently wove excerpts from various stories by Indian women writers like Jhumpa Lahiri, Lalitambika Antarjanam, dealing with tradition and scepticism, collective responsibility and individual choice, into its narrative. 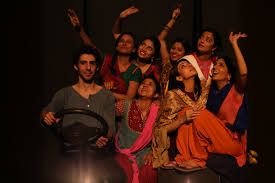 2011-2012
OK Tata Bye, bye
Based on the Bachchda women who, by tradition, are sex workers and bread winners in their family, OK Tata Bye, bye, is a poignant play on a community that follows the matrilineal system. The play is based on filmmakers trying to capture the lives of the community on camera but they soon realize that these girls maybe naïve but not fools and it is the filmmakers who are the ones facing some hard questions.
“Great theatre is about challenging how we think and encouraging us to fantasize about a world we aspire to.” – Willem Dafoe

“The future of the planet concerns all of us, and all of us should do what we can to protect it. As I told the foresters, and the women, you don’t need a diploma to plant a tree,” said Wangari Maathai, the first African woman to win the Nobel Peace Prize for her exemplary work in the field of environmental conservatism, women’s rights, and led the charge of reforestation in Kenya.


And she is one of the many who have worked tirelessly in the field of forest conservation, environment protection and biodiversity preservation. From Margret Murie and Celia Hunter who shouldered the responsibility of safeguarding the Arctic National Wildlife Refuge to Rachel Carson – an author, whose passion for environment and acute observation of conventional farming and its impacts on the environment and public health led to the development of the Environment Protection Agency (EPA) in the US to Jane Goodall the world renowned anthropologist and primatologist who made conservation and animal welfare her life’s mission to Vandana Shiva – who began her life in environmental activism and studies by documenting  the progress of the Chipko Movement in real time in the late 1980s.

And the achievements of these women trailblazers did not just fulfil the singular goal of forest conservation and biodiversity preservation but it did something more than that. Through each of their journeys, they encouraged hundreds and thousands of women to join their efforts and brought to the forefront the dynamic of “women and forests”.

Indigenous and rural women living in forests in many parts of the world are tasked with feeding and taking care of the family and that includes foraging for medicinal herbs, gathering food and fuel wood, collecting water. Thus, they are equal stakeholders in the forest ecosystem, interacting with every aspect of forest life, the wilderness, the illegal felling, the legal but destructive mining, good and bad conservation management and practices as well as the complicated land rights issues.

Therefore, understanding their challenges, viewing forest conservation and management and biodiversity protection from their perspective will not only give a new impetus to this endeavour but also make this journey a lot more holistic and sustainable. While the governments and think tanks engage with this head on, we as responsible citizens of the world have but one job, to be informed and educated.

Therefore, this International Forest Day, we have found three comprehensive resources that focus on the involvement of women in forest conservation.

World Rainforest Movement: An international initiative that focuses on the challenges faced by and solutions developed by the indigenous and peasant communities from the Global South. Their compendium – Women, forests and plantations. The Gender Dimension – published in 2005 presents several cases studies and articles focusing on the challenges of mining, illegal felling and climate change.

Forests and Gender: Another brilliant compilation by Women’s Environment and Development Organization (WEDO) – an advocacy that focuses on women’s rights, social, economic and environmental justice — that has compiled case studies from several countries across the world focused on the relationship between gender and forest conservation and issues such as climate change. This 123-page quick read, published in collaboration with International Union for Conservation of Nature (IUCN) also has a dedicated section aimed at possible strategies and management processes that can be adopted to gain a gender perspective in nature conservation management and climate change action plans.

Women’s Earth &Climate Action Network, International (WECAN): A solution-based organization that collaborates with women worldwide in policy advocacy, grassroots projects, trainings and building a climate justice movement. One of their major projects Women forForests aids indigenous women in their efforts to stand up to the extractive industries such as mining, felling, and expansive industrial agriculture that are threatening the very ecosystems they live in. Their Women Speak initiative is an international collaboration of collecting stories and cases studies of women who are at the frontlines of climate change.

So, let us keep ourselves educated and informed, learn to critically view our existing systems through different lenses, and while we do that put into practice simple actions at an individual level because as Wangari Maathai said, you do not need a diploma to plant a tree.