The Warp and Weft of Life

For the last five years we have been seeing the resurgence of the small-town family stories in our Hindi film industry. And its success at the box office as well as the ratings from the critics indicates that we as a nation are willing to immerse ourselves in the stories of authentic characters and relationships. 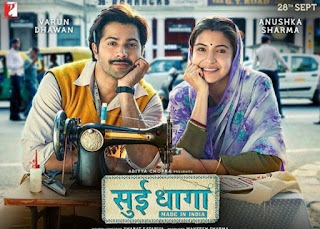 And one such character that has evolved over the years is the female lead in these stories. Once characterised as one-dimensional village or small-town girl, supporting the male protagonist, a naïve prop, a damsel in distress, has now slowly evolved into educated, progressive, ambitious and somewhat idealistic young woman. Be it Jaya from Toilet Ek Prem Katha or Bittu from Bareilly Ki Barfi, be it Sandhya from Dum Laga Ke Haisha or Sugandha from Shubh Mangal Saavdhan, these women are strong, opinionated, assertive and a welcome sight on screen. However, on the other hand, we still do have female characters like Radhika Apte’s Gayatri from Padman from a small town in Madhya Pradesh who still believe that it is better to die in shame and silence then to disclose your discomfort of menstruation; and that is the truth of the matter, and depiction of these characters is also important for us to know the long road ahead of us in terms of addressing gender based issues. But then there is another character that graced the silver screen in 2017, Mamta from Sui Dhaaga.

On cursory glance Mamta is anything but Jaya or Sandhya. She is the head covering, kitchen bound, hardworking daughter-in-law; someone we have seen before. So much so, Anushka Sharma who plays Mamta initially did not want to play this character despite loving the script. And when asked on FC Unfiltered by Anupama Chopra, Sharma replied that she was not confident that she would be able to convince the audience of the character of Mamta since she was quite the opposite in her real life.

So, what makes this character stand out, why does Mamta stand with the Jayas and Bittus of our new small town and village girls? She might follow the rules of the milieu, fulfil the responsibilities of the house, and look homely which lends authenticity to the character from a small town in India but there is strength in her quiet presence, and she is definitely not at loss for words when the need arises. She is not the “bechaari” that Harleen Madam, a ready-made garment manufacturing owner, an interesting rather one-dimensional foil for Mamta, thinks her to be.

She is self-respecting voice of reason when inherently jovial and unaware Mauji, her husband, is insulted at a wedding by his boss. She is a leader that encourages him to make his own path—as a tailor, a trade that was his and his family’s forte once upon a time. And it is her decisiveness and persuasion that actually leads the couple to compete in the Fashion Fund in the third act. While the movie rests on the shoulders of the hero’s story arc, his relationship with his cantankerous father and ailing mother, conflict with his brother, and his struggle to make it in the tailoring business, the story of the heroine is not left behind. Mamta is a brilliant negotiator and adept at marketing and advertising much to Mauji’s surprise; not because he was indifferent to her talent or contribution, but because the “milieu” of a working-class family does not offer them the time or the privacy to get to know each other, and neither does the conservative set up help them which the movie subtly presents to us. It is through this journey of having their own business that both the characters learn about each other and their relationship develops which is crucial for the characters to succeed in their endeavour. While the story draws our attention to the dying art of handloom, and small-town professions like tailoring and weaving in presence of the ready-made garment factories and malls, it is the realness of the characters of Mauji and Mamta, their relationship, and their trials and tribulations that give us an insight into the lives of real artisans. More often than not these artisanal tradition runs in the family where both the husband and wife contribute to the product with their skills and the decline in any artisanal industry impacts both the men and women, more so women because of the lack of financial autonomy. Apart from the relationship of the two characters the movie sensitively shows their aspirations of recognition and furthering their art going unfulfilled, and their desperation and frustration as they see their inheritance being poached by computers and machines for printing on cheap textiles that will be flooded back into those very same malls and shops they pass by every day. Both Mamta and Mauji go through a journey that knocks their naiveté down but they rise up to the challenge and make their dream come true as partners.

While there is a long way for us to go in depicting different types of layered female characters and layered relationships vis a vis their male counterparts, Mamta definitely stands among the new age rural women shaping our country’s stories on screen and her relationship with Mauji reflects the thousands of relationships that already exist among our working-class and rural professions and industries.